No list of classic photographers’ self portraits, especially those deploying reflections, would be complete without Ilse Bing’s Self portrait with Leica, 1931 but a homage to that piece was created for EyV exercise 5.2 and could not be repeated here without risking self-plagiarism. The original is, however, shown in the composite of source material and the homage on the web site (Blackburn, 2019).

Course assignments are normally submitted as physical prints but this was not possible because of virus restrictions. No recent guidance has been found on the technical attributes for submissions and so those stated for EyV (Bloomfield, 2017, p.15) have been used, see fig. 1.

The Vivian Maier piece produced is not the one that would have been created under normal circumstances. Her 1961 self portrait in a supermarket security mirror, recently shown at the Huxley-Parlour Gallery, Piccadilly would have been used as a source and updated as a self portrait in a supermarket security camera. This is now the second image due to be taken after virus restrictions are lifted, as listed in the Virus Image Deficit blog post (Blackburn, 2020). Notwithstanding that intention, I am satisfied with the existing Maier piece as part of this submission.

It was not clear from the assignment specification (Boothroyd, 2017, p.89) whether the submission in this context should be one image or several, ‘[s]end your finished piece to your tutor’. This submission comprises six self portraits, modelled on those of well known photographers from the past. If only one were to be permitted then it would be that based on Bill Brandt’s, although it is acknowledged that was a portrait by Laelia Goehr rather than a self portrait.

This submission comprises:
1. this covering ‘letter’
2. a 300-word submission text
3. six jpg images plus two composites, one of the source material and one of the outcomes
4. a pdf contact sheet of the images
5. a pdf of my assignment ‘learning log’, which I call the ‘development’ page

The ‘matters arising’ from assignment 2 are available online:
Rework
Essays

My approach to assignments has been more deliberate than hitherto,  considered collectively from the outset. Two approaches for this assignment were envisaged: either something after John Coplans’ self-portraits, or a series of homages to the self-portraits of past photographers. As Coplans’ work was alluded to in the first assignment, imitative self-portraits became the subject.

There is a distinction between the self-portraits taken by photographers in the 20th century and the social media selfie. Bright and van Erp (2019) suggest that while the former demonstrate the distinctive characteristics of the subject, the latter is often an exercise in conformity to a prevailing trend. It is particularly mirror portraits (which, by depicting the tools of their trade, emphasise their roles) that I wished to emulate. In the context of Part 3 of the course, my approach to this assignment is as masquerade which I describe in my course notes as ‘assuming other personas for a variety of purposes ranging from self-aggrandisement to social comment’ (Blackburn, 2020): my treatment is towards the aggrandising wing of the genre.

Ilse Bing’s iconic 1931 self-portrait was excluded as this was used in EyV: mirror shots by contemporaries Henri and Krull should have been considered, but those chosen were Alvarez Bravo, Kubrick, Ronis, Maier, Avedon and a Brandt portrait by Laelia Goehr which I took, at first, for a mirror portrait †. These provide a range of settings and formats, some requiring props gradually assembled with this in mind. All except the Maier could be replicated at home which, although not an initial consideration, proved vital, given the current virus constraints. The Maier shot will be taken when circumstances permit. [14May20 see rework]

† it is argued in the Blog (Blackburn, 2020) that Emin’s Outside Myself (Monument Valley), although not taken by her, may be regarded as a self-portrait. 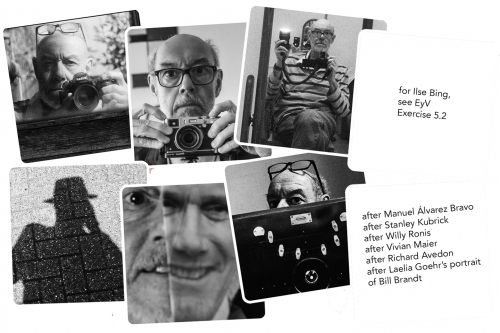 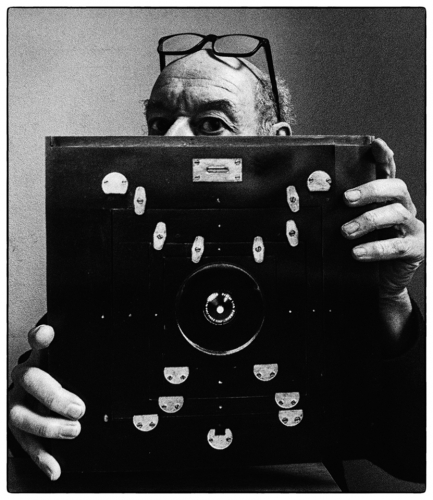 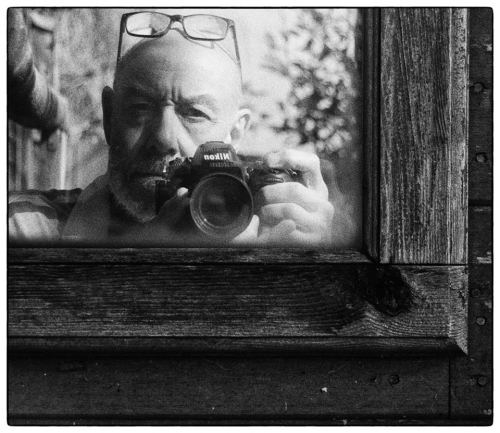 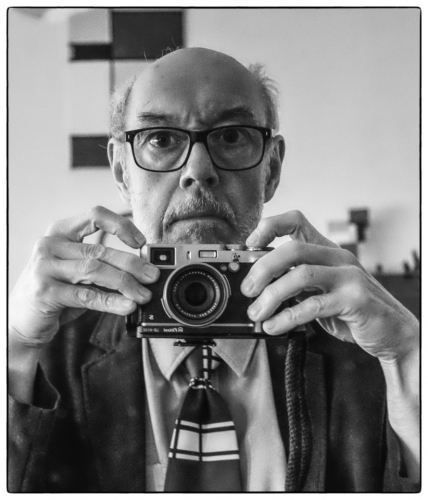 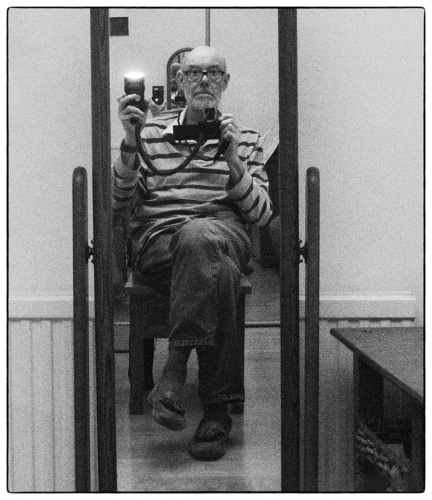 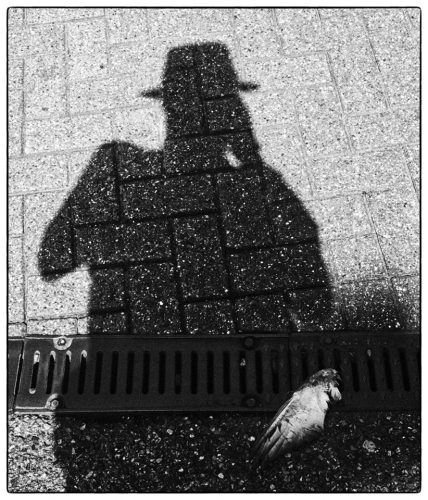 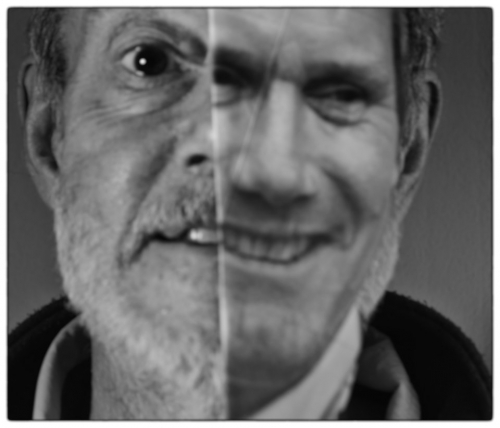