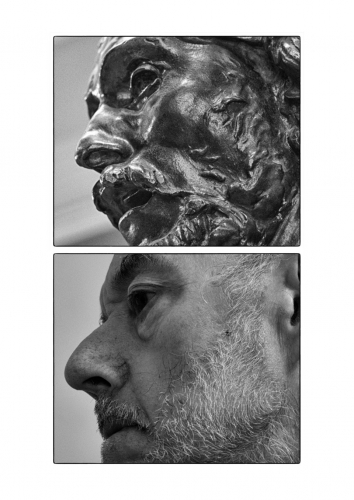 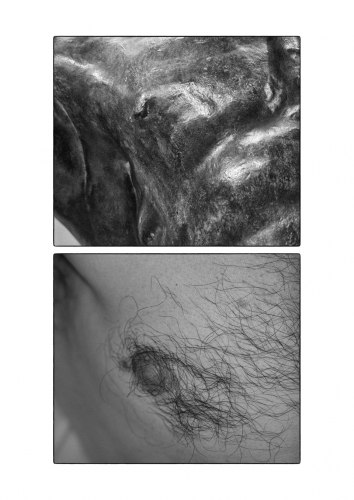 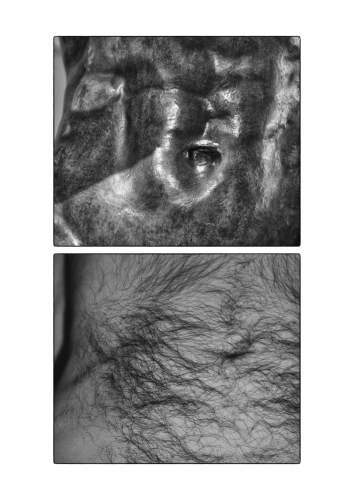 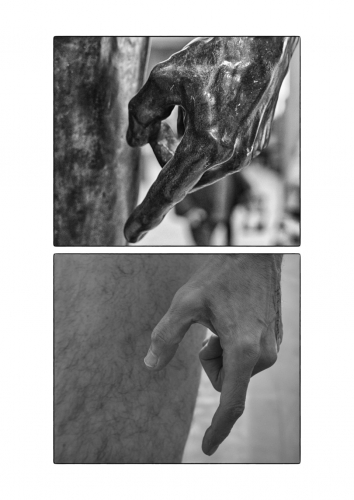 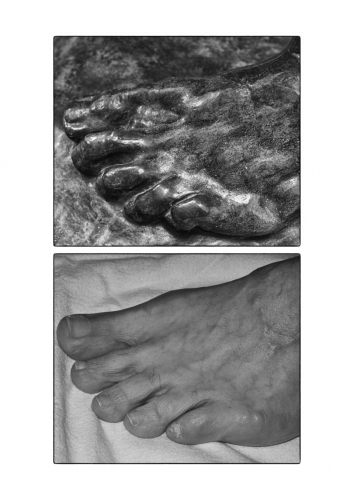 I interpreted this project as the illustration of contrasts. My intention at first was to shoot Worshipping Gods, depicting ostentatious Christian interior detail and an austere (or alternatively elaborate) other faith. This foundered when, having photographed Southwark Cathedral, I failed to find a synagogue, mosque or temple that allows interior photography.

With little time remaining for an alternative project, I opted for subjects offering availability and chose Representing Bodies, comparing details of V&A human sculpture to my own body. While working at the V&A, I thought that concentrating on a single work might offer clarity and having toyed with the idea of using Canova’s Three Graces, chose Rodin’s St John the Baptist.

By this time, I had moved some distance from the original assignment brief which specified ‘images…taken from real life’.

I printed the images both in colour and in black and white and decided to submit the latter. This allows concentration on the differences and similarities of form, without the distraction of colour (and incidentally sidesteps issues with colour casts).

Reflection
Technically, they are reasonably competent. The images are rather darker than intended when printed, especially the black and white versions, and I will try to adjust for that in future assignments. The project idea was interesting conceptually and also in practical terms to execute. I realised throughout that I had drifted from the assignment brief. This cannot be an original idea, although I have not found anything like it online. After finishing the shooting, I found in Marcoci’s The Original Copy (2010) a juxtaposition from Lorraine O’Grady’s Miscegenated Family Album series featuring a human portrait with an Egyptian statue of Nefertiti’s sister. I believe that the project concept is stronger (and closer to the brief) than my first effort and, O’Grady’s work notwithstanding, might merit further exploration.